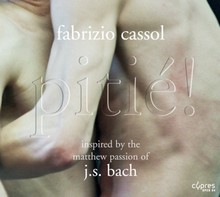 After the success of VSPRS and Monteverdi, Alain Platel and Fabrizio Cassol once more join their talents for pitié! This new work was inspired by Bach?s Saint Matthew Passion, transposed into a musical style interwoven with multifarious influences. The result is overwhelming in emotion, on the verge of opera. The production has already been programmed nearly one hundred times in some forty cities around the world. Fabrizio Cassol?s re-orchestration blends influences from jazz, manouche, Mali and the blues, backed up by the trio Aka Moon, and it manages to create a new narrative based on one of music?s monuments. This version of the Passion seeks to express the sorrow of a mother, a role that does not exist in the original work, confronted as she is by the sacrifice of her son. From this choice we have a cast of three singers: a soprano for the mother and two very similar voices for the children (an alto/mezzo and a counter-tenor, the young Congolese Serge Kakudji, with his limpid timbre). The role of Christ is doubled here, following an esoteric vision whereby Christ was simultaneously a masculine and a feminine soul. The outcome is a moving experience in which the idea of compassion, pushed to the point of paroxysm that is the sacrifice of oneself, is nonetheless portrayed in a positive light. The ultimate expression of this music, of this Passion, is the love, called upon and shared, that radiates through each scene. BUY HERE